Story by Pam Williams from The Salem County News. 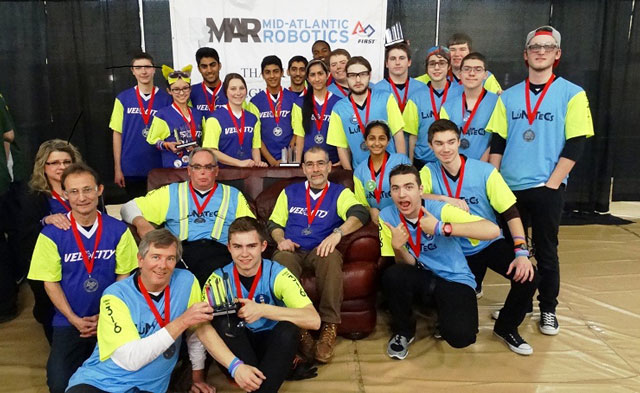 The teams competed at Upper Darby High School on March 27-28. Team 316 — sponsored by DuPont, Boeing, PSE&G, Warner & Co. Certified Public Accountants, South Jersey Robotics and Salem Community College – placed 2nd out of 36 teams at the end of qualification matches. They chose sister team 5420, seated 15th at end of qualifications, as their alliance partner. Team 5420 is a rookie team sponsored by NASA, Cumberland County College, City of Bridgeton and South Jersey Robotics. In the end, the squads each took home silver, qualifying both for the district championships. Team 316 sits in 15th position (among 120 teams) going into championships for the Eastern Pennsylvania, Delaware and New Jersey district. Team 5420 is in 37th place.

Both teams had a great qualifying season. Team 316 took home silver and an imagery award in an inter-district event in Massachusetts in March, and silver and the UL Safety Award at the Upper Darby event. Team 5420 took home the rookie all-star award at Seneca High School and silver at Upper Darby.

Today, the organization sponsors 10 community robotics teams in middle and high schools, engaging more than 70 students. Through partnerships with community colleges in Salem and Cumberland Counties, corporate partnerships with DuPont, Boeing and PSEG, and local business such as Warner & Co. CPAs, and government such as City of Bridgeton, SJR is striving to double the number of students and teams in the next several years.

Continued support from local communities is key to these teams’ successes. To show support and to learn more about being a sponsor, mentor or to join the teams, please email South Jersey Robotics at info@sjrobotics.com