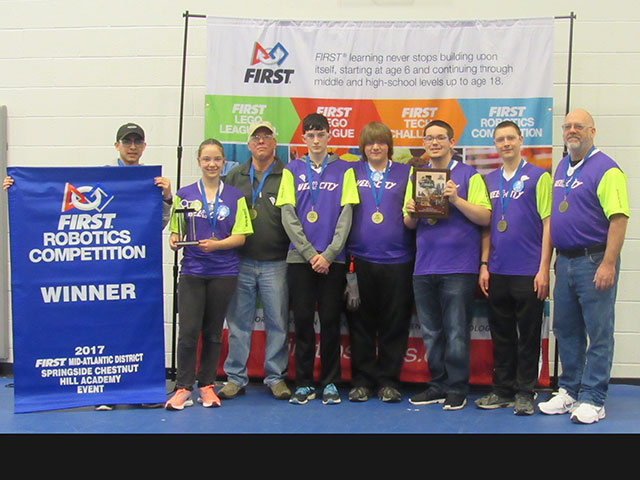 Against incredible odds, FRC Team 5420 Velocity scored a win at the FIRST Mid-Atlantic District Springside Chestnut Hill Academy Event.  This hard-working six-member team played their hearts out against much larger teams with greater resources.  Velocity finished the qualification rounds in tenth place, with great hopes of being chosen for the upcoming elimination matches.

Alliance captain #3, Team 4342 – Demon Robotics asked Velocity with Team 103 – Cybersonics to join their alliance.  This trio of teams came together quickly and posted back-to-back wins in their two quarterfinal matches, advancing them to the next round.

In the semi-finals, the alliance again won back-to-back matches to advance to the finals.  They played so well together, their second semi- final match saw the alliance post the highest score of the day – 356 points!

The finals were a nail-biter with all three matches scoring over 300 points!  The opposing alliance won the first match by three points.  Then Velocity’s alliance won the second match handily.  The third match had to be played to determine a winning alliance!  Demon Robotics, Cybersonics, and Velocity claimed the victory!

With this win and ranking points from also being given the Creativity Award and Safety Award at this event, Velocity found itself headed to the MAR District Championships!

To see all the statistics of the event, click here.