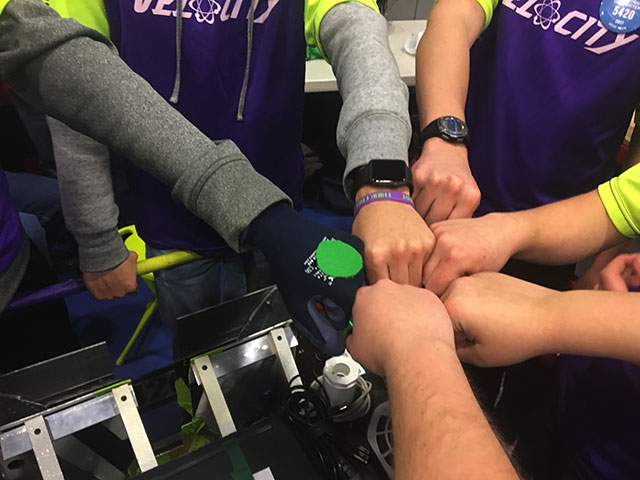 Not only did Velocity win this FIRST® Mid-Atlantic District Springside Chestnut Hill Academy Event, they also won the Creativity Award.  As you can see in the picture, a person is wearing a glove with a green circle. This is Velocity’s human player, Zach, in the 2017 Steamworks game.  This challenge required drive team to guide their robots to dump gears onto the airship for the human player to use.

That green circle on the glove, along with another green circle, a red “X”, and orange taped fingers are what Zach used to give signals back to the drive team.  He used the glove to inform them of what the gear was doing and when it was in proper placement. This clever student-designed communications method won Team Velocity the Creativity Award.

FIRST Robotics recognizes more than a team’s winning efforts.  Judges go to the teams and observe them all day long for other exceptional skills.  Creativity is one of them.  FIRST’s Creativity Award “Celebrates creativity in design, use of component, or strategy of play.”  In this case, the glove that Zach designed for communicating with his team was creative enough to catch the attention of the judges and earn the team this award.